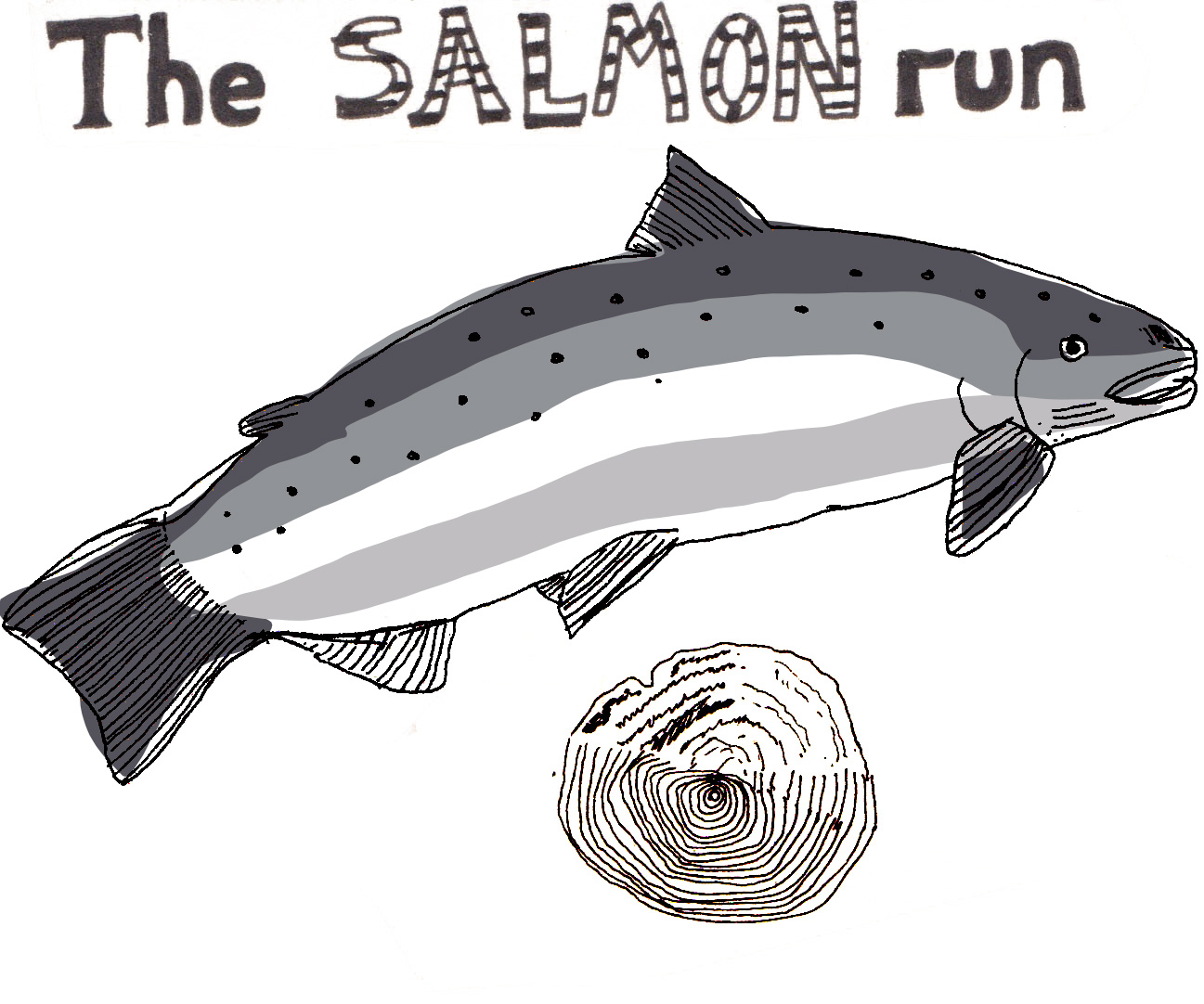 Salmon mean a lot to people for their amazing journeys, their waterfall leaping skills, their size and their appearance in our iconic rivers. They have a place in the mythology of our culture as heroic creatures and sources of wisdom. And they are on the decline. Dramatically. They are at the centre of a complex eco-system and as such their decline makes them the proverbial canary in the mine. So what is going on? and inspired by questions gathered from the local community in the Exe Estuary boxes: When are the salmon coming back?

We are working with the Creative Arc, a unique collaboration between the University of Exeter, Exeter City Council and The Royal Albert Memorial Museum & Art Gallery to explore how the museum and its collections can help shape a better Exeter – with the focus of our project on ‘the environment and sustainability’. As part of this we explored the RAMM archives and researched the tidal reach and the history of the river and the city and its tides over time (see blog The Tides Reach). The mammoth Salmon caught in 1924 and weighing 27.8kg and now on display in Topsham Museum captured our imaginations and Salmon seine netting is banned for ten years on the Exe as numbers are so low.   See blog post on The Last Salmon Boat. Salmon that do survive find their way back to the Exe estuary from as far away as Iceland and then continue through the busy city of Exeter and onwards to the spawning grounds in Exmoor where they were born. We want to link the estuary as a transit place for many species within the wider river catchement and the city to its more-than-human inhabitants and the river as habitat, as source of health, food and life.

We have set out to celebrate this creature and to highlights the challenges facing it. To do so we have begun by empathising with the creature and trying to see the world and the river and estuary as she sees it.

What is it like for the fish in the river as it passes though our man-made world? And how or what does she see?  We have explored the very lens they see through and the view from the waterline.

How the fish sees?
Fish eyes are popularly known to be 180 degrees. If a fish looks up it increases it’s view of what is above through refraction at the surface of the water. Strangely their eyes contain a perfect spherical clear lens inside a circular lens inside the actual eyeball. We have found that the inner sphere is so clear that it actually works as a ‘fisheye’ lens so naturally we have tried taking pictures through them to see as the fish sees! An ambition is to take a photo using a fish eye lens with the lens as the pin hole in a pinhole camera. Note: the lenses stay totally clear for about 1-2 hours after being extracted. 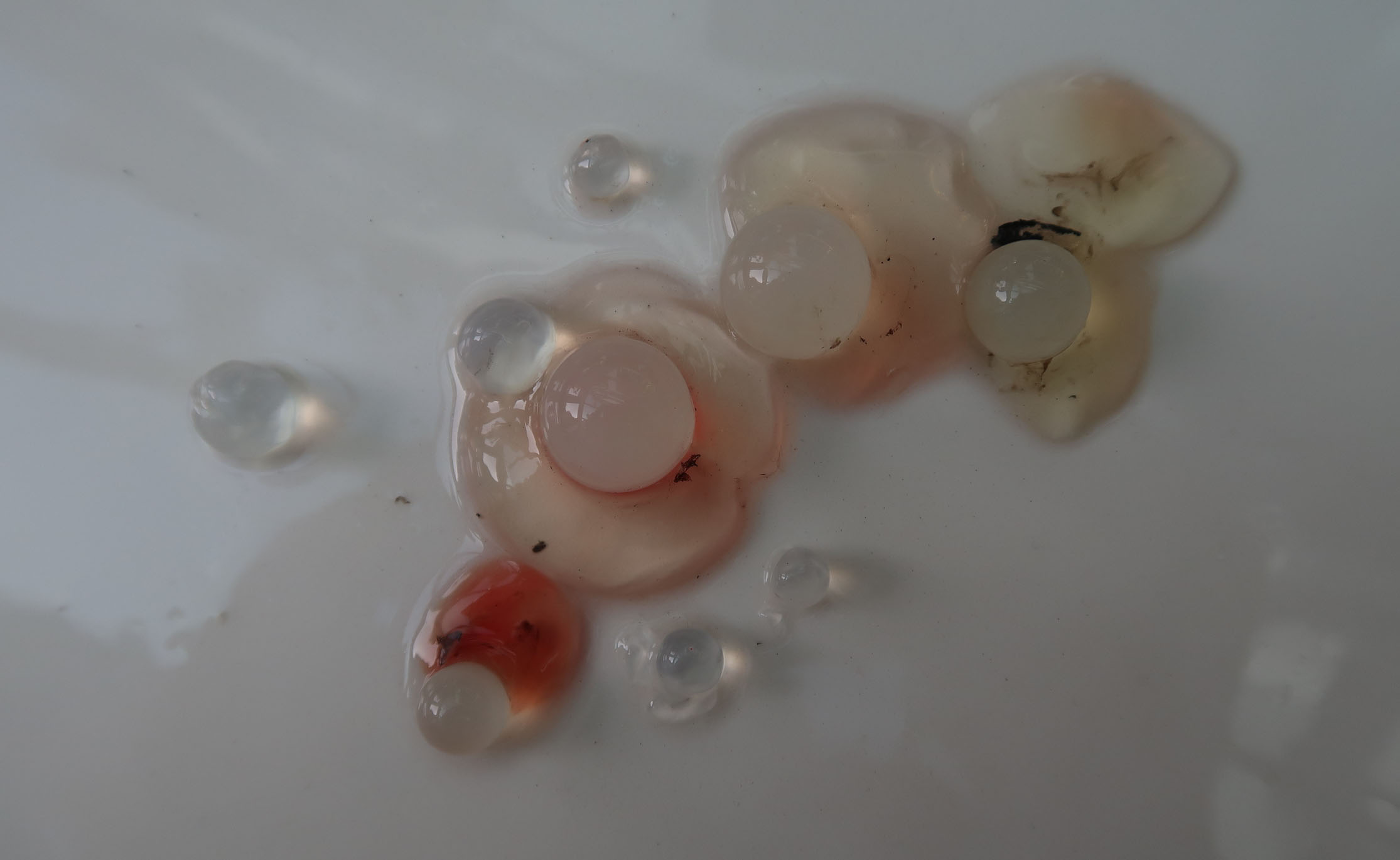 Yes these amazing perfectly round clear balls are from the inside of a real fish eye!

We would also like to revisit an experiment made by in 1906 American inventor Robert W Wood based on how a fish would see an ultrawide hemispherical view from beneath the water. Wood first coined the term fisheye was coined in 1906. This shows how a fish uses the natural refraction of light through the surface of the water. Below are illustrations showing the experiment, a result/print and a diagram of the fish using reflection as well as refraction! 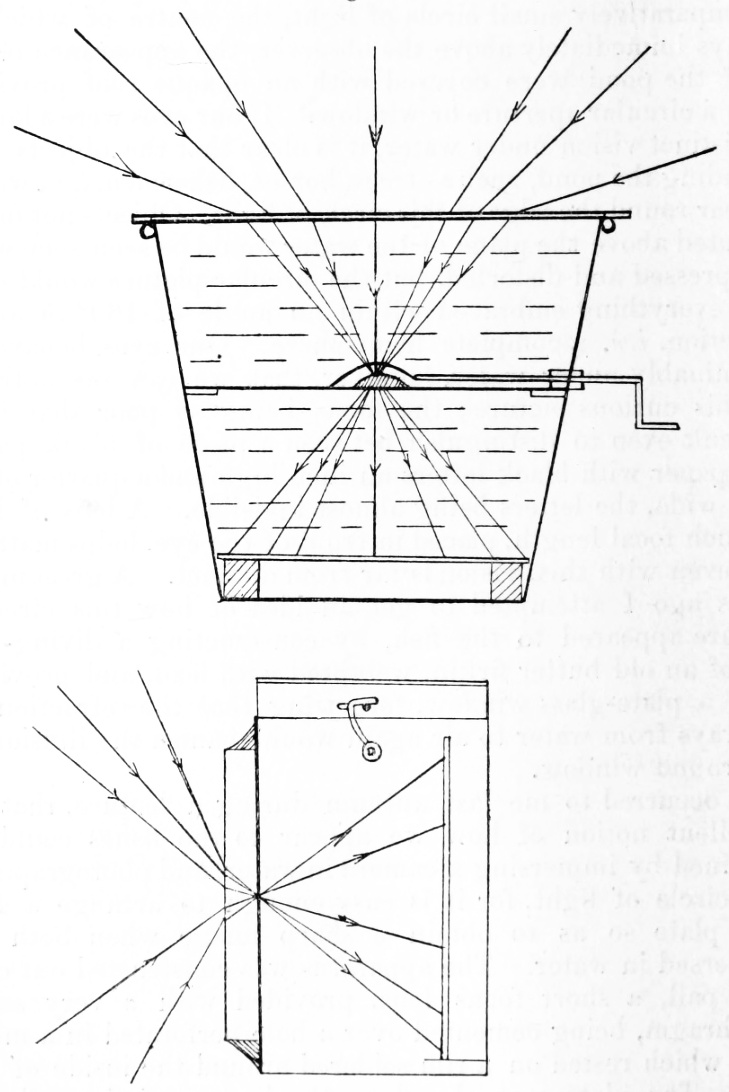 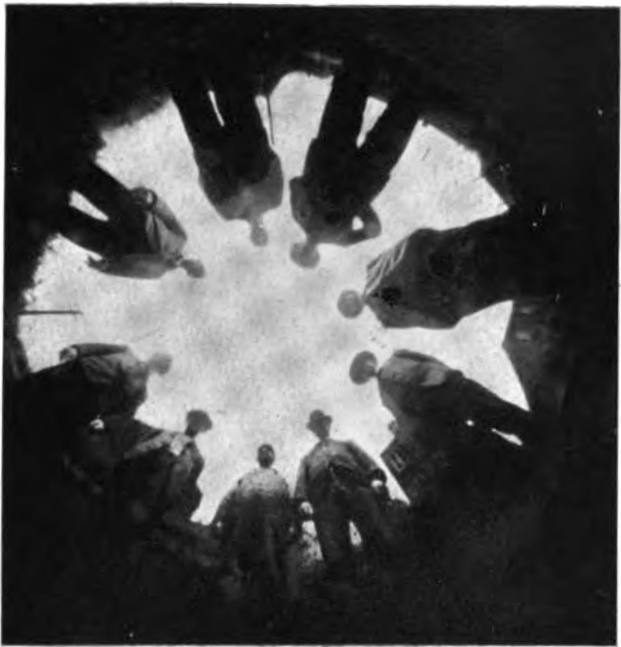 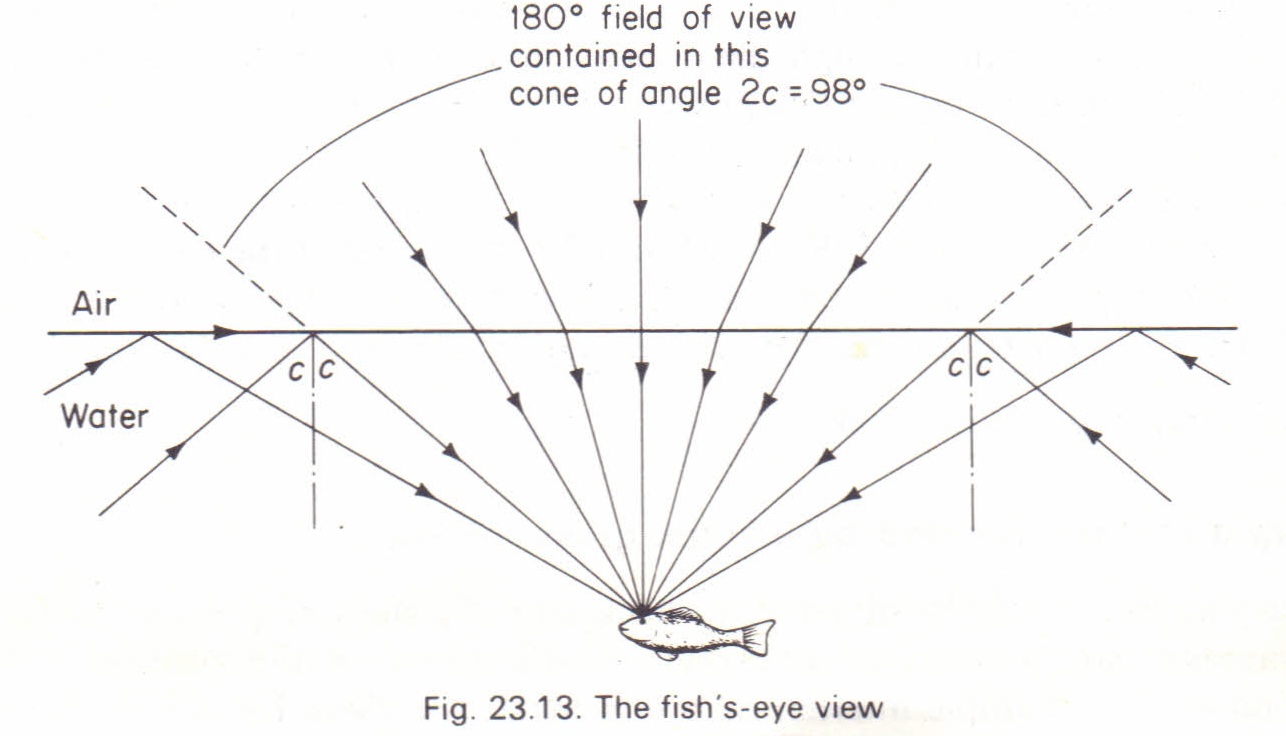 How does it feel? The Salmon Run
Following the journey of returning salmon from the wild north Atlantic to the higher reaches of the River Barle, over one day in Autumn a relay of runners of different ages and abilities will pass between them a hand designed salmon icon from the sea to the spawning grounds – travelling right through the heart of the city of Exeter, a journey of over the 50 miles. During the time moving up river the salmon don’t eat and rely on stores of food energy accumulated at sea. 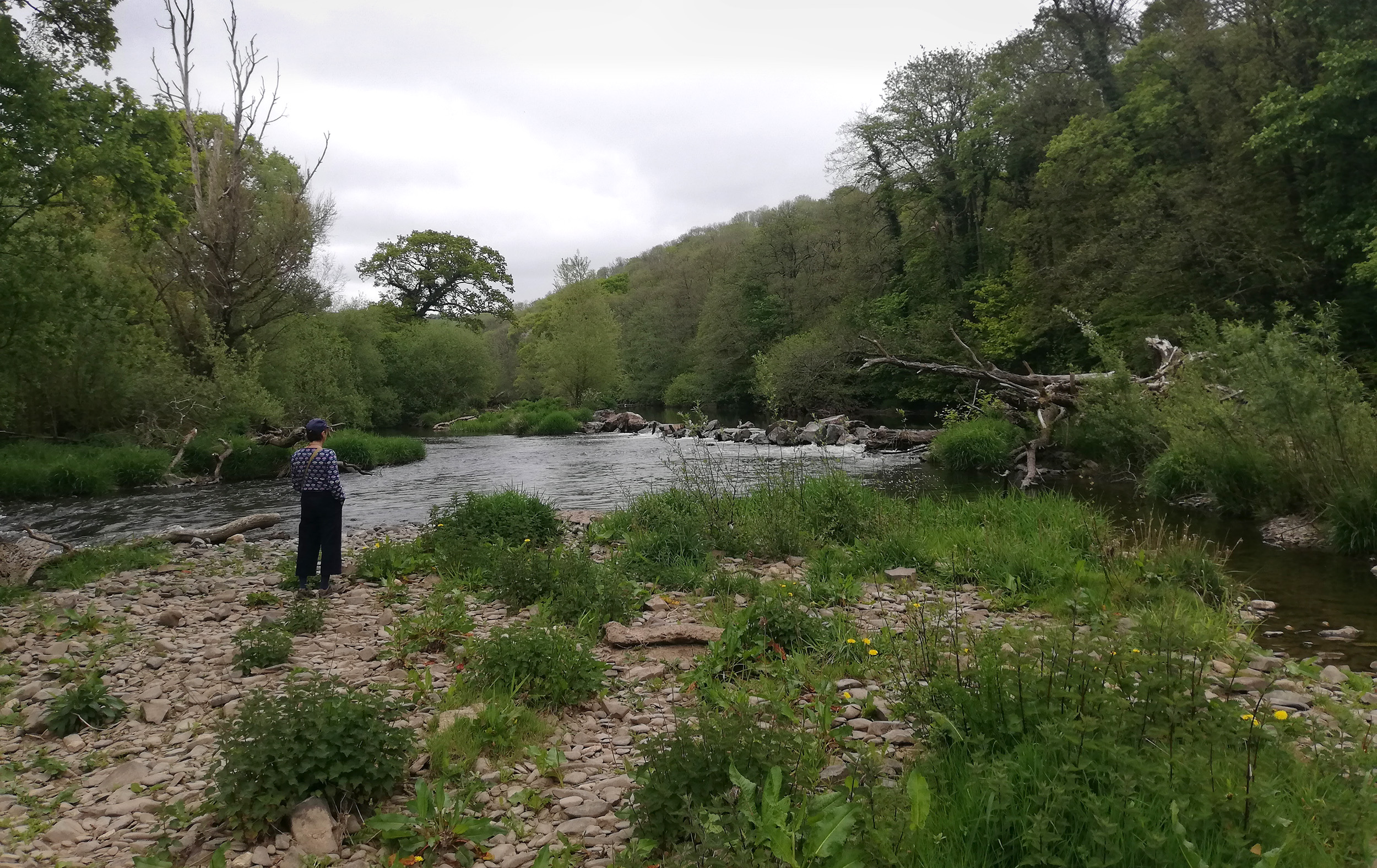 There are at least 14 weirs before they reach their spawning grounds some of these may have been to create pools to make it easier to catch the salmon and other fish. After that they were made to create water power creating leats that channelled water to water wheels. The growth of human intervention created barriers for the salmon which however they were able to adapt to famously throwing themselves up the weirs or waterfalls with gymnastic power. But the salmon’s ability to vault these huge structures depends on reliable amounts of water in the rivers at the right times and in the right qualtities. Each weir crossing slows their journey and depletes energy as they leap over concrete or traverse fish ladders, often pausing for long periods to wait for the water levels to be right. Water levels are increasingly too low due to drought or too high due to increased flashy rainfall. Waiting at weirs can pose dangers for the salmon as they gather for example through predation and disease transmission between the salmon.

The Exe Valley Way is made up of all sorts of surfaces including footpaths, tarred cyclepath and sections of road (some quiet, some not) and passes through the amazing quiet rural countryside and several beautiful villages with nice pubs!  There are many parts when it travels close to the river and other parts where you get a view of the whole Exe valley. Travelling up river you get a real feel for the change of scale and environment that the Salmon navigates in her lifetime from wide, deep ocean currents and tides to floods or shallow tree lined, gravel bedded streams and waterfalls. 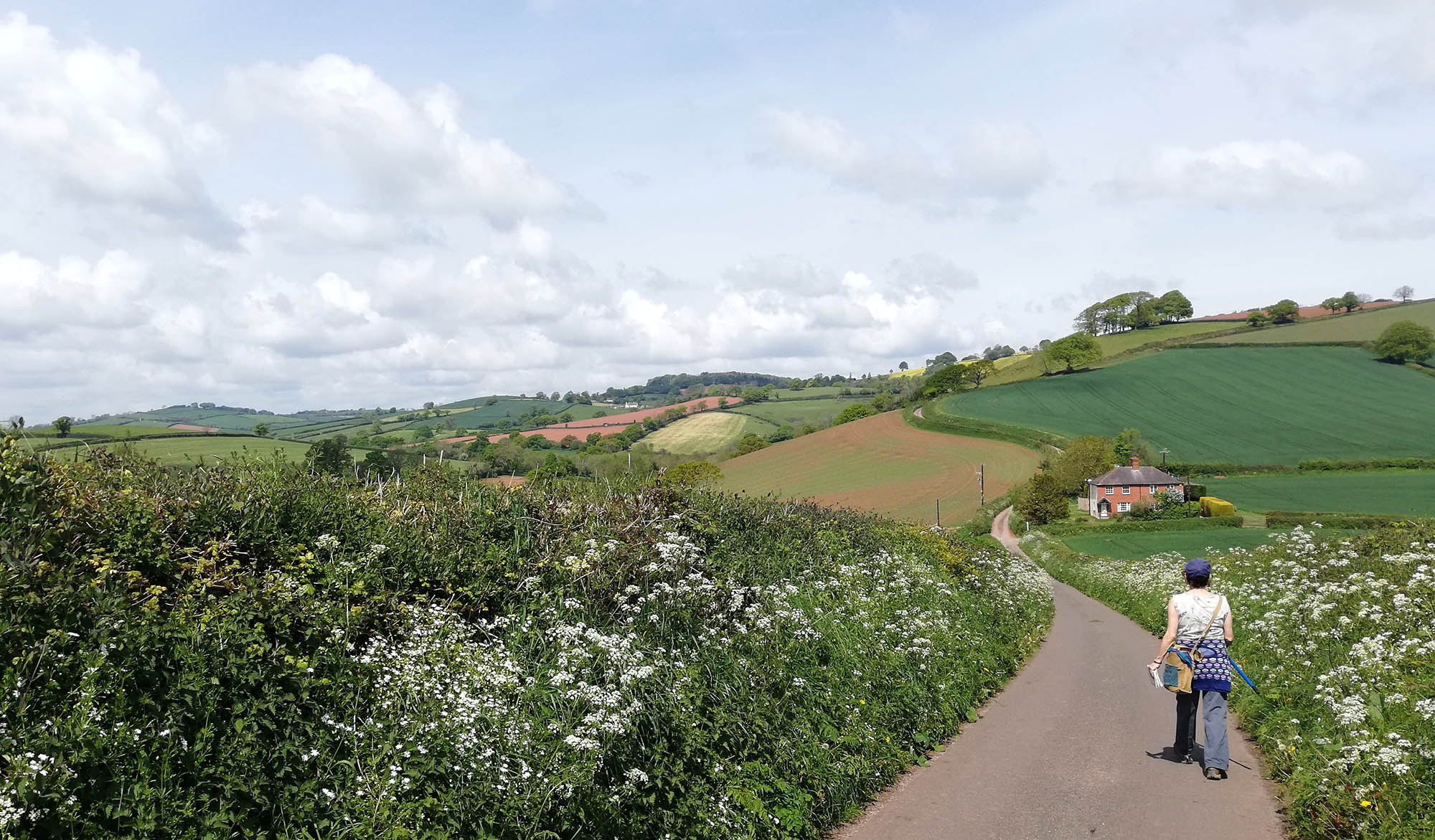 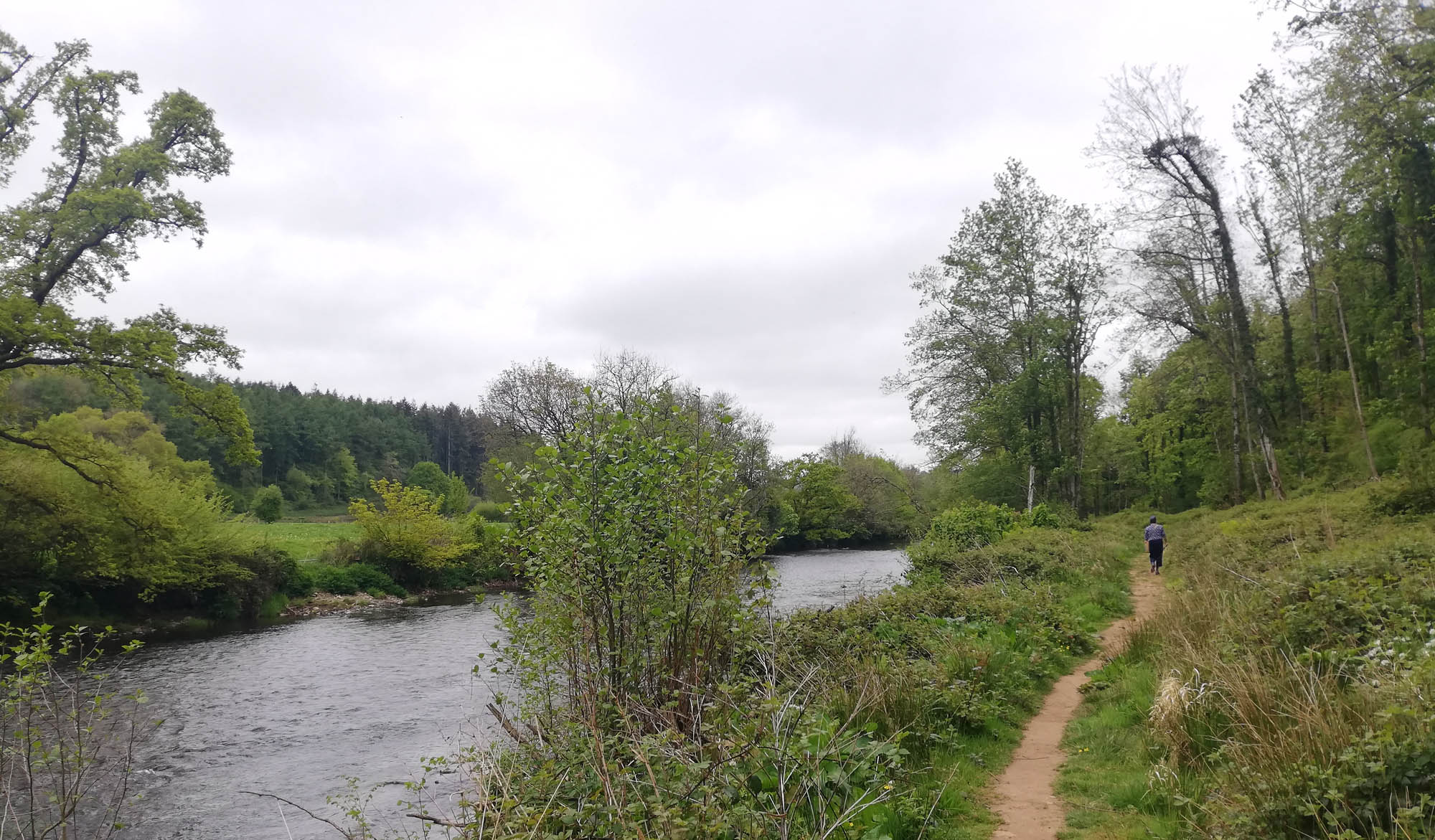 Why is the salmon jumping over a log in our design at the top of this post? Well it is not. The thing that looks like a log cut through with tree rings (or indeed a finger print) is in fact the scale of a salmon which can be read to find out how much time it spent at sea and in the river and much more about the conditions in which it swam!

Recently books have been found containing records made by a Robert Gibson in Canada in which he intermittently smeared some scales from fish while recording individual salmon. These scales are turning out to be a goldmine of information telling us much about what has changed for the salmon in 100 years. Unfortunately the future is not rosy for the Atlantic Salmon although there are things we can do to give Atlantic Salmon a fighting change of survival. As part of Salmon Run we are making a short podcast that will talk about some of the threats and challenges to Salmon living today in the Exe. 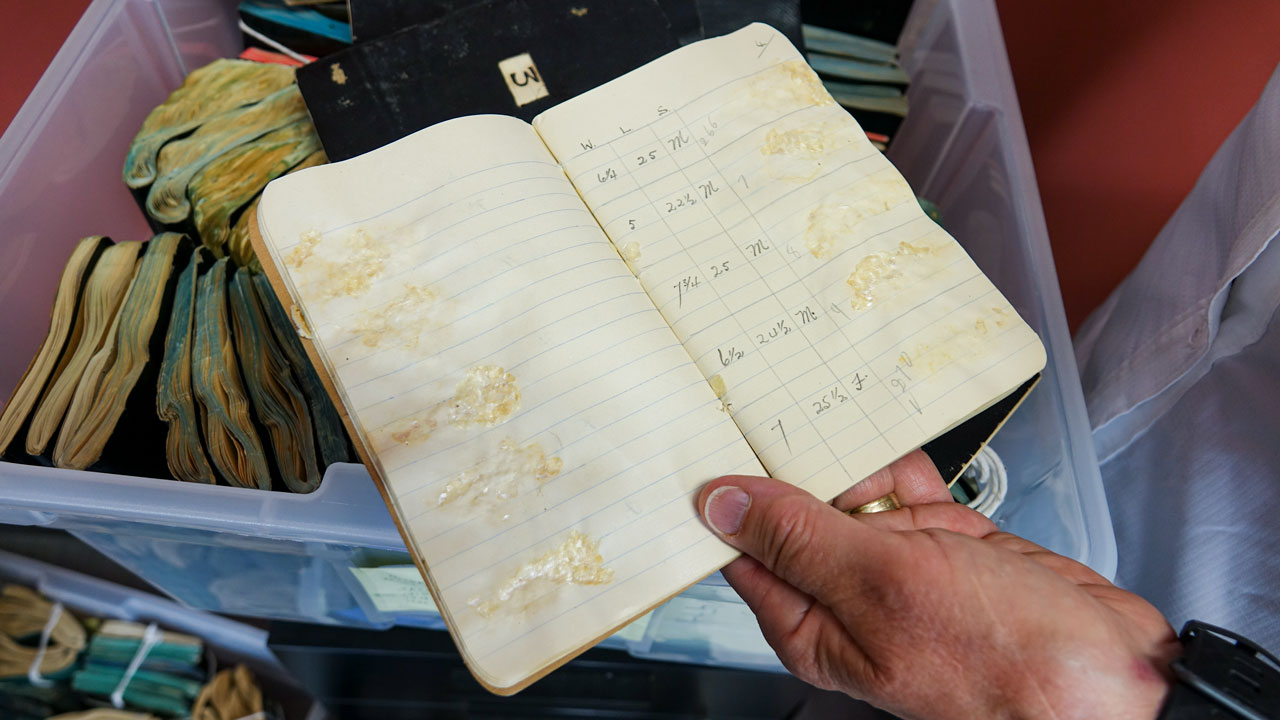