What we want to know about…Changing Sea Temperatures

This image shows the bathymetry (undersea topography) of the North West European Shelf Seas (NWS), the seas around the UK (including the English Channel and the North, Celtic and Irish Seas).
The European continental tectonic plate extends below the sea surface over a large area, to a depth of about 200m (coloured from purple to orange), before abruptly dropping to the open ocean sea floor at depths of over 2000m (yellows to blue).
This broad shelf area slows, and therefore amplifies the tides as they move from the open ocean, leading to some of the greatest tidal ranges in the world. These tides play an important role in shaping the oceanography and biology of the North West European Shelf.

With so many people swimming in coastal waters right now and becoming intimately aware of sea temperatures, we got increasingly curious about how the temperatures are changing and how this is impacting on our estuary and coastline.  I started doing a drawing which charts almost ten years of monthly sea temperature data recorded from our nearest buoy (off Dawlish) and runs until the end of 2020 (thank you to Plymouth Marine Observatory and in particular Isabelle Kelly for crunching the data). See end of blog for the drawing.

We invited Nova Mieszkowska from the Marine Biological Association and Jonathan Tinker from Met Office Hadley Centre who both study sea temperature change and its impacts to join residents of the Exe estuary for an online discussion. We invited questions from the participants and scientists beforehand so that we could spend most of the time in conversation. It was great to meet new people, learn more and to share our connections to the oceans and the estuary.  In terms of participant feedback, 87.5% of the participants said they attended the event because they were concerned about human impacts on the environment and 100% said they would welcome further opportunities to have further conversations with researchers. Other comments included: “As a researcher it is really important to hear from communities to understand how they think we should be tackling the climate and biodiversity crisis. We have so much data and information, we need to learn how to use this information to create change.” and from a public participant: “Learning, so that you (as a citizen) can understand the situation and work out how you might be able to be part of the solution” We hope to keep learning with you – let us know what you want to know!

The sea takes much longer to warm up and cool down than the land or the atmosphere.

As water warms, it expands, and so become less dense, and tends to float over colder, saltier water.

In the summer, this leads to a warm layer floating on a colder layer, and the two layers don’t tend to mix (i.e. nutrients from below do not mix to the sunlit upper layers). This is called “stratification”.

In the winter, there is less heat and energy from the sun, and much more wind mixing up the water, and so the two layers of water mix (in shallow seas like the North West European shelf seas). In areas of strong tides (I.e., English Channel, southern North Sea), the tides are strong enough to mix these two later throughout the year.

The changes in temperature, salinity (the amount of salt in the water), and so density, drive the deep ocean circulation, the thermohaline circulation, that takes about 3000 years to complete a cycle. For more on Thermohaline Circulation see this page

Stratification is one of the most important controls on the ecosystem. The geography and tides of the North West Shelf control which regions remain mixed throughout the year, and which seasonally stratify.  Stratification controls how many nutrients are available for the plankton blooms, controls the timing of the blooms, and their size. These phytoplankton are the basis of the marine ecosystem so a phytoplankton (microscopic marine plants) bloom triggers a zooplankton (bigger marine animals that feed on the phytoplankton) bloom and this cascades along the food chain to top predators such as fish. So, the abundance of life in the oceans is dependent on these blooms and when they happen

This leads to a trend in temperature from climate change,  which is projected to give an  average 2.9 degrees warming averaged across the North West European Shelf Seas by the end of the 21st century.   Find our more in my paper here: J. Tinker/Uncertainly in Climate Projections.  The impact of increased energy/heat is felt at a different pace and magnitude in the air and in oceans.  Here is a quote from Rachel Carson’s Rachel Carson’s The Sea Around Us (our summer read) which explains how the ocean is capable of holding so much of the increased energy and heat. It also shows how the impacts of climate change will be felt over different time scales in the ocean system as the heat is absorbed more slowly.

But even more does the ocean dominate the air. Its effect on the temperature and humidity of the atmosphere is far greater than the small transfer of heat from air to sea. It takes 3000 times as much heat to warm a given volume of water 1 degree as to warm an equal volume of air by the same amount. The heat lost by a cubic meter of water on cooling 1 degree would raise the temperature of 3000 cubic meters of air by the same amount. Or to use an another example, a layer of water a meter deep, on cooling .1 degree centigrade could warm a layer of air 33 metres thick by 10 degrees centigrade. -Rachel Carson

Changes in temperature due to climate change also have to be played off against the range of variability in Sea Surface Temperature. Examples are the daily temperature cycle, the annual seasonal cycle, and the variability associated with weather systems. There is also variability year to year and decade to decade. Globally, then ENSO (El Nino Southern Oscillation) is the classic example. On a short-time scale, this variability can have a greater impact than what we are seeing through climate change.

A summary of the latest evidence on Marine Climate Change impacts can be found here: http://www.mccip.org.uk/impacts-report-cards/full-report-cards/2020/

‘The sea, once it casts its spell, holds one in its net of wonder forever’ – Jacques Yves Cousteau.

Species that prefer warmer sea temperatures are increasing in abundance on rocky shores around the UK. Some species such as the kelp Laminaria ochroleuca and the stalked barnacle Policipes policipes extending their most northerly distributional range limit in the southwest. The hermit crab Clibanarius clibanarius is appearing for the first time in recent years since the 1950s. 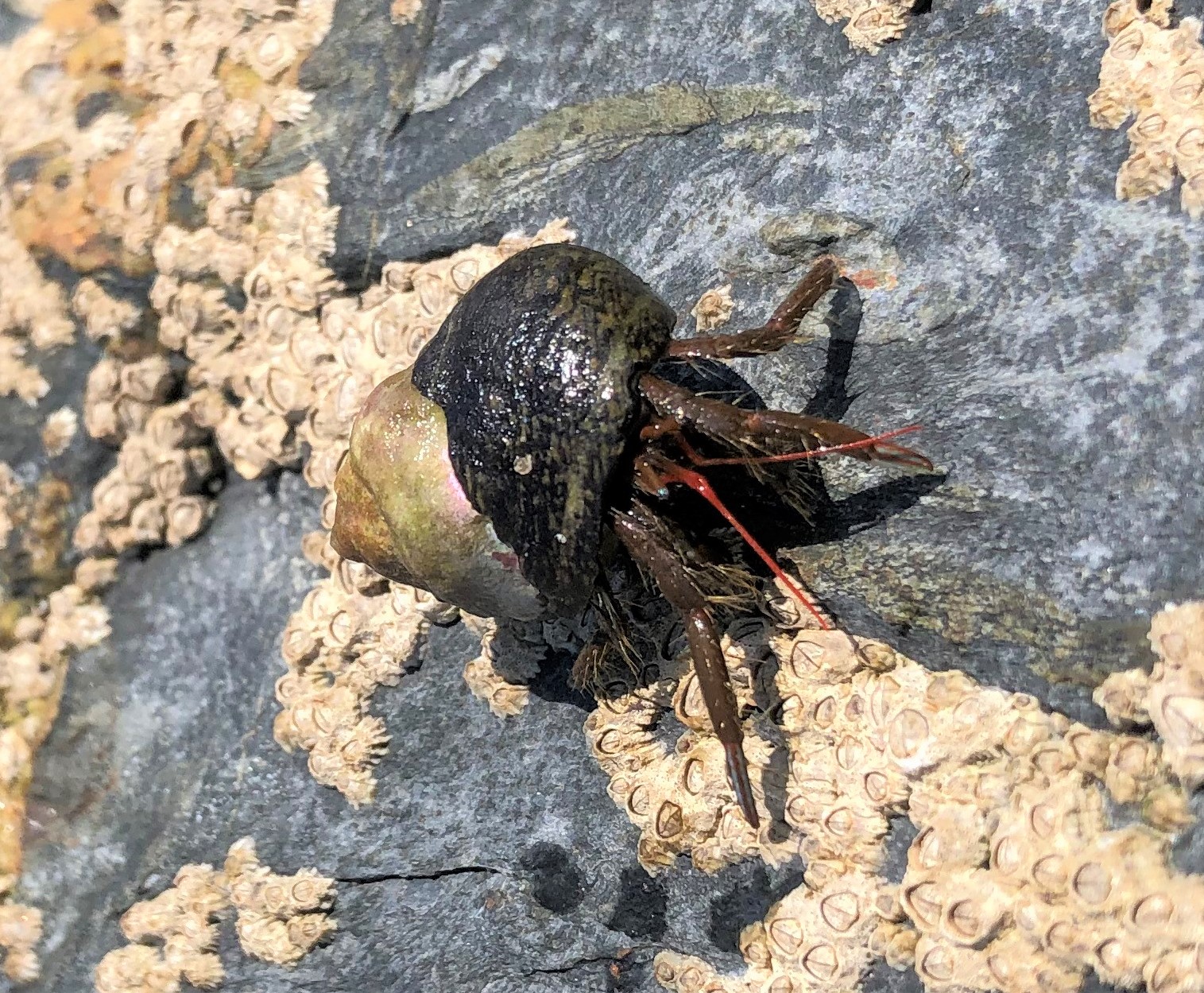 Many of our native species prefer colder sea temperatures and are declining in the south west of the UK. The barnacle Semibalanus balanoides and the kelp Alaria esculenta are now difficult to find in many areas where they used to be abundant.

Its interesting to see Jay Boyle’s recent research on invasive Pacific Oysters on the Exe Estuary. The impact of Pacific Oysters is being felt in particular across the whole South Coast of England https://www.exe-estuary.org/aliens-on-the-exe-pacific-oysters/

If you have any questions about the above or don’t understand anything please email us and we will contact you or put you in touch with Jon or Nova. 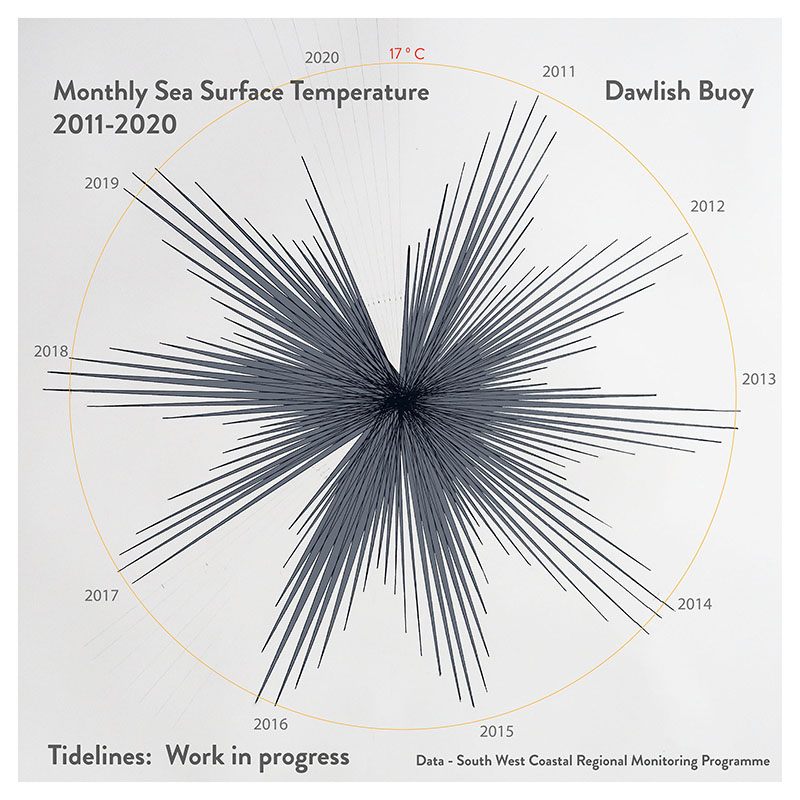