HAVE YOU SEEN ONE OF THESE? 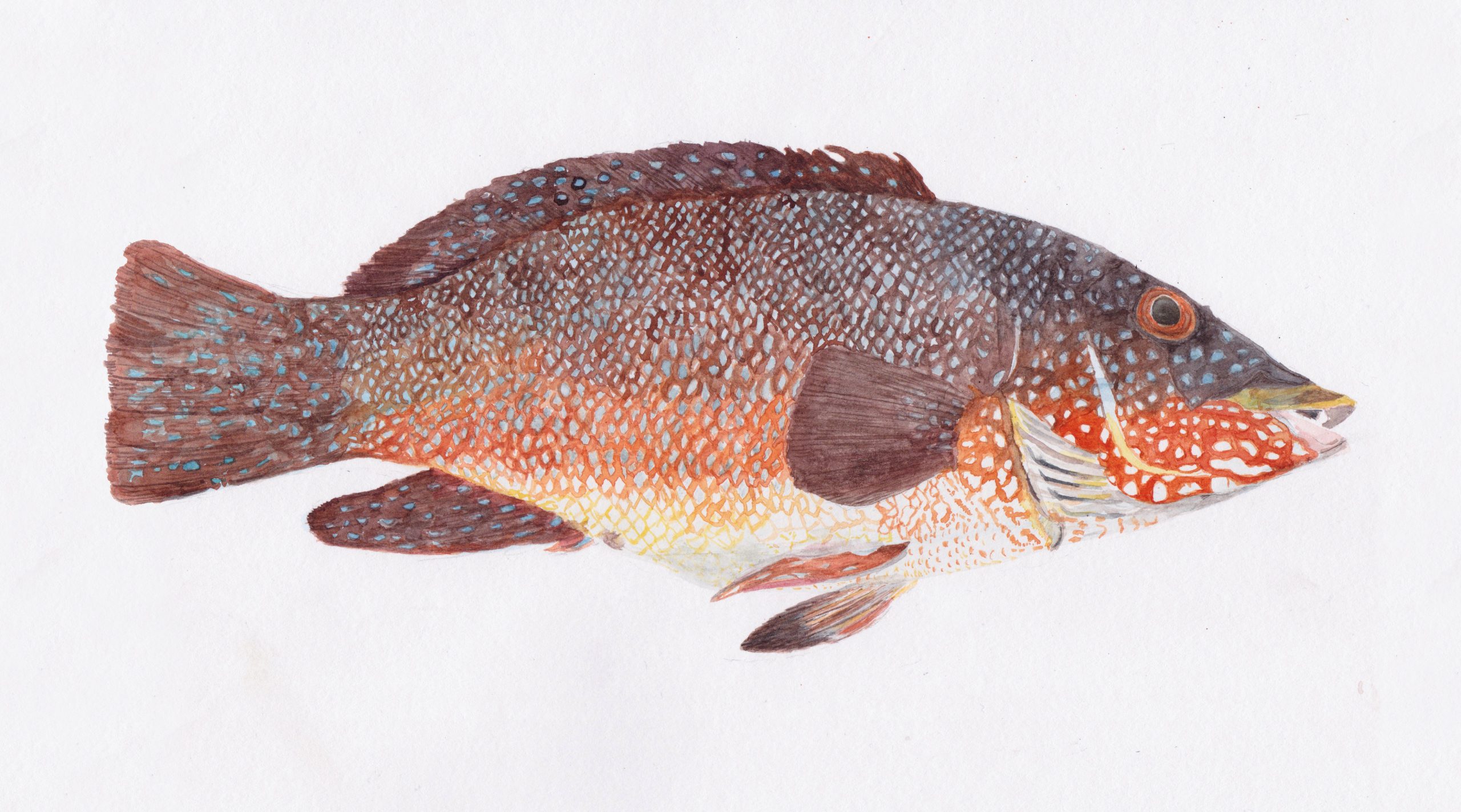 Early Sunday we came across the sou’westered fisherman bringing in a small catch at Belsher’s Slipway from his day boat. I spied a Ballen Wrasse in the crate, a beautiful creature which looks more like something you would see in a tropical aquarium. This fish has a row of tiny, sharp teeth, thick lips, with scales coloured through acid yellow to vivid orange and dark brown with all-over spots ranging in tone from almost turquoise to a grey/blue. Drawing a fish over several hours feels like an honour and a gift and it got me curious about this creature:

Wrasse species live in rocky areas often close the shore. They like kelp and seaweed cover and feed on shellfish such as mussels, cockles, limpets and winkles also all sorts of crustaceans (eg crab, crayfish, prawn) and occasionally small fish.

Wrasse have a very unusual life cycle. All wrasse are born female and remain female for the first part of their lives. At around six years old around half of the wrasse will transform into males and will breed with the wrasse which have remained female. A male may mate with a whole group of females and if the male dies the largest female will change sex and take over.  Spawning takes place in late spring and summer with wrasse building a nest of seaweed wedged between rocks which contains the eggs which they then defend aggressively. After a few weeks the eggs will have hatched and the larvae float away from the nest, where they will eventually grow into female little wrasse and repeat the cycle.

Ballan Wrasse are not very popular for food in the UK. The fisherman tells me that there is no market for the females who are duller in colour and people only go for the more colourful males. Wrasse do have value as a ‘cleaner fish’ which pick parasites, particularly sea lice, off high value farmed fish such as salmon.  See this story about Wrasse being removed from Devon shores and taken in large numbers to Scottish fish farms. Definitely a fish to keep an eye on,  especially if you are out with a snorkel.

Animated Discussion about The Sea Around Us by Rachel Carson

Here is a timelapse of an animated discussion about Rachel Carson’s epic book about the sea called The Sea Around Us. Over 100 people read the book over the summer as ebook, audiobook or hard copy supplied by the libraries around the Exe estuary organised by Tidelines. 3 group discussions have now taken place, 2 as groups of 6 socially-distanced participants and in lovely estuaryside locations and the third being online. Discussions included scientists from the Marine Biological Association based in Plymouth and The Global Systems Institute from Exeter University along with other readers of the book from the wider estuary community. This timelapse was in a boatshed in the Gut at Camperdown in Exmouth as the tide came in. In fact we had to leave via someone’s garden as the beach completely disappeared. Very appropriate both to Tidelines and the Sea Around Us! You can see it coming behind us as well as the hyperactive sea scouts shooting back and forwards!

We used this little boat as a reference image in a mini film for the Citizan seminar on Facebook and Instagram and all that. The boat has been with me for a long time now. It was found on a beach on the island of North Uist in the Western Isles. It was probably made locally as there are plenty of people who understand and often make full-sized boat. The design is very good and shows an understanding of boat balance and has a vertical prow which is a particular type of boat I think like a Brixham trawler or a Fifie, a type of boat made on the islands by a family called Stewarts (Grimsay) as well as others although the name suggests they have an origin on the East coast of Scotland in Fife. We did not get good weather from this outing from the East coast of the estuary!

A recording was made of the Citizan seminar and it can be found here: https://youtu.be/UWPO8zQPDYQ
Many thanks to Citizan for inviting us. 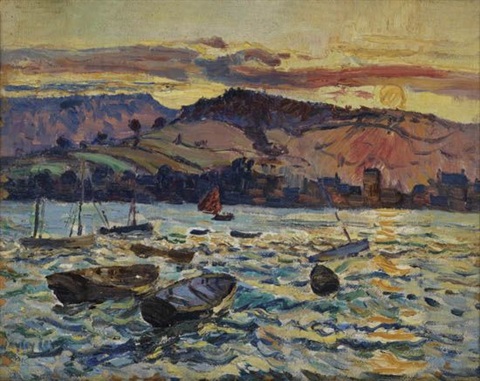 I came across this painting by Richard Hayley Lever (Australian American 1875 – 1958) who painted in Exmouth in the early part of the 20th century. He has a lovely way with paint and his work would have been on trend at the time as he is quite a wild impressionist leaning towards expressionist at times.

But what caught my eye in this picture was the raging currents tossing the boats on their moorings I think opposite Shelley beach (Shelly to some!). I think this is one of the Exe’s most awesome sites: The tide in full flow racing towards and across Bull Hill as the tide reaches it’s height possibly in a contrasting Westerley wind. You can experience the raw power of the sea from the quayside or Marina where Hayley Lever did the same many years ago.

He paints Exmouth quite a lot so must have lived in the town for a while. And his pictures are also a time-capsule showing a busy fishing town and lots more besides. 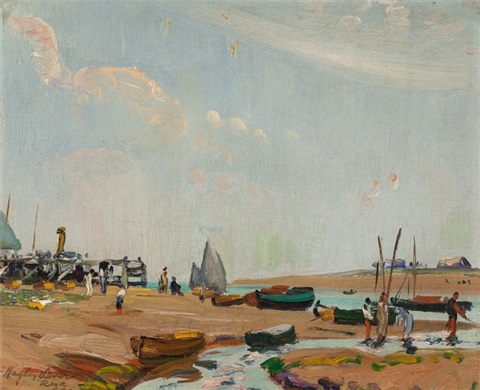 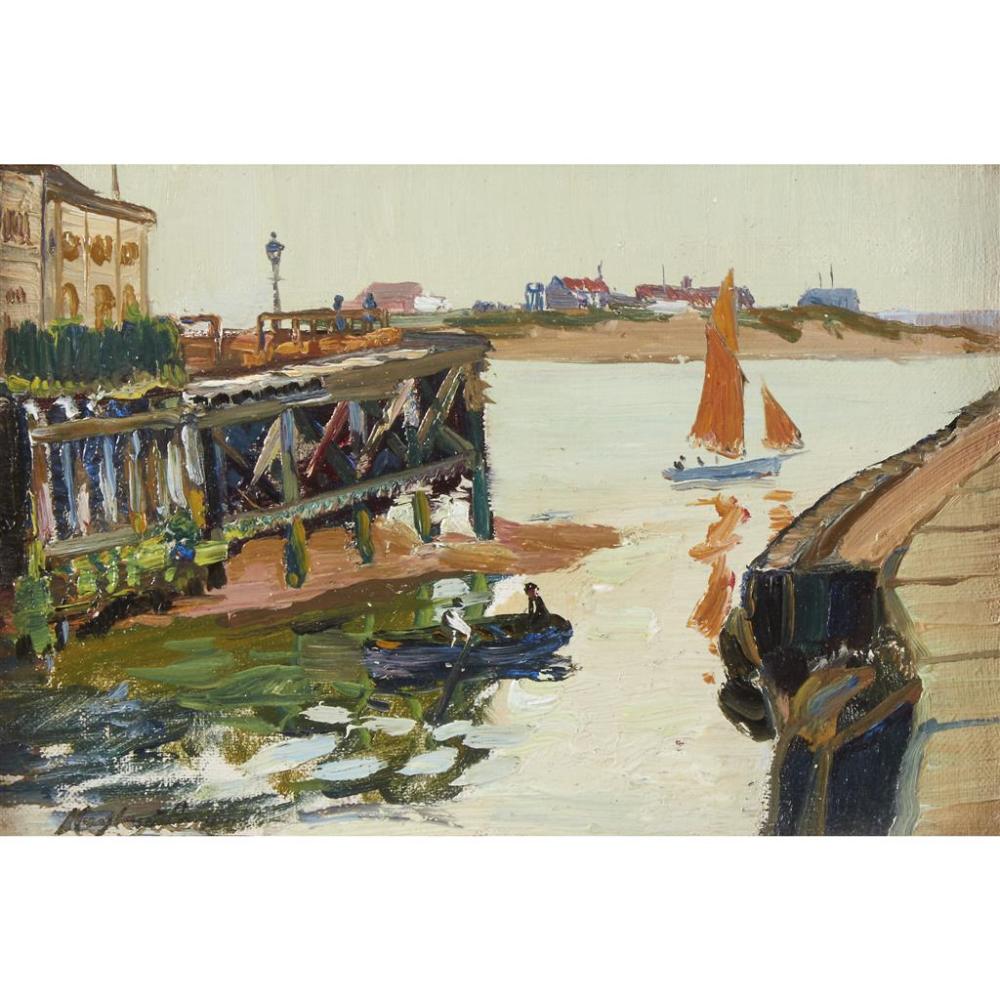 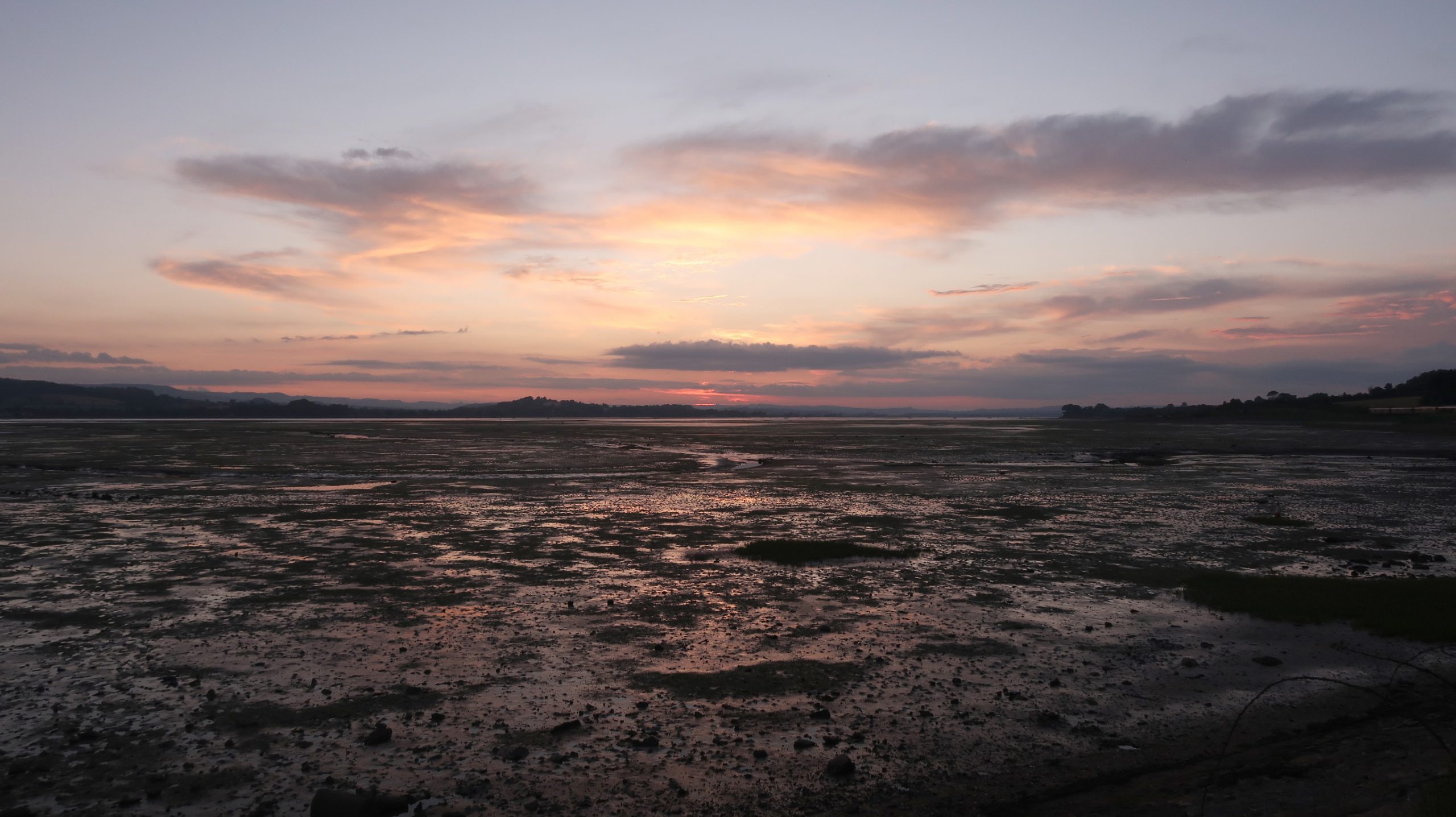 Meditating on different perceptions of the estuary: sand and mud, east and west, upstream and downstream. It is true that a lot of the upper estuary is inaccessible unless you are a wading bird. It’s inaccessibility gives rise to caution and so is less popular, less visited and less well-known. I would have this picture as my screensaver but a Caribbean beach will be more popular and common. With it’s reflections and textures the muddier estuary is at least as stunning. That would be mud versus sand.

Then there is East/West: Would you rather have the sunset or the sunrise? Do those living in the west get up earlier than the East? 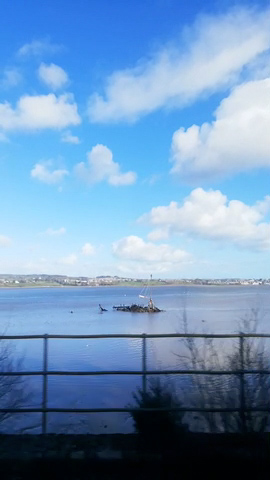 Then there is the railway which has the best view from the West side, one of the best train routes in the country, but the pay off is that the walker, cyclist or driver simply cannot see the estuary with all its reflections because of the enormous barrier that runs along from Dawlish Warren to Exminster: the railway itself. The railway may well be the major factor that has reduced housing on the West side. But there are other factors. Sun, land management (protection) and the railway. Things would certainly have been very different if Brunel’s bridge from Exmouth to Dawlish Warren had been built.

Send in your ruminations, observations and questions! How do we feel about the vast estuary? Wasteland? Gloomy? Unique? Paradise?

On a very still dry day I recorded the speed of the tide. It looks like 5mm a minute from this clip.

The surface tension for split seconds holds back the tide, bending the water. Resisting. 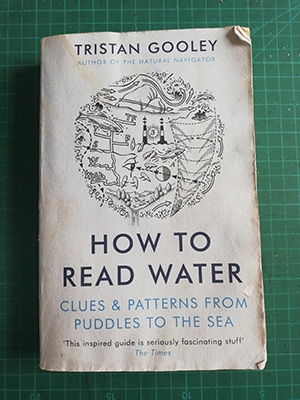 There is a book about this called: How to Read Water by Tristan Gooley. Fascinating, subtle, detailed. Good read while the fish aren’t biting!

Please leave your email to sign up for project updates as they happen.

Any cookies that may not be particularly necessary for the website to function and is used specifically to collect user personal data via analytics, ads, other embedded contents are termed as non-necessary cookies. It is mandatory to procure user consent prior to running these cookies on your website.