Tides and Maps at Marpool School 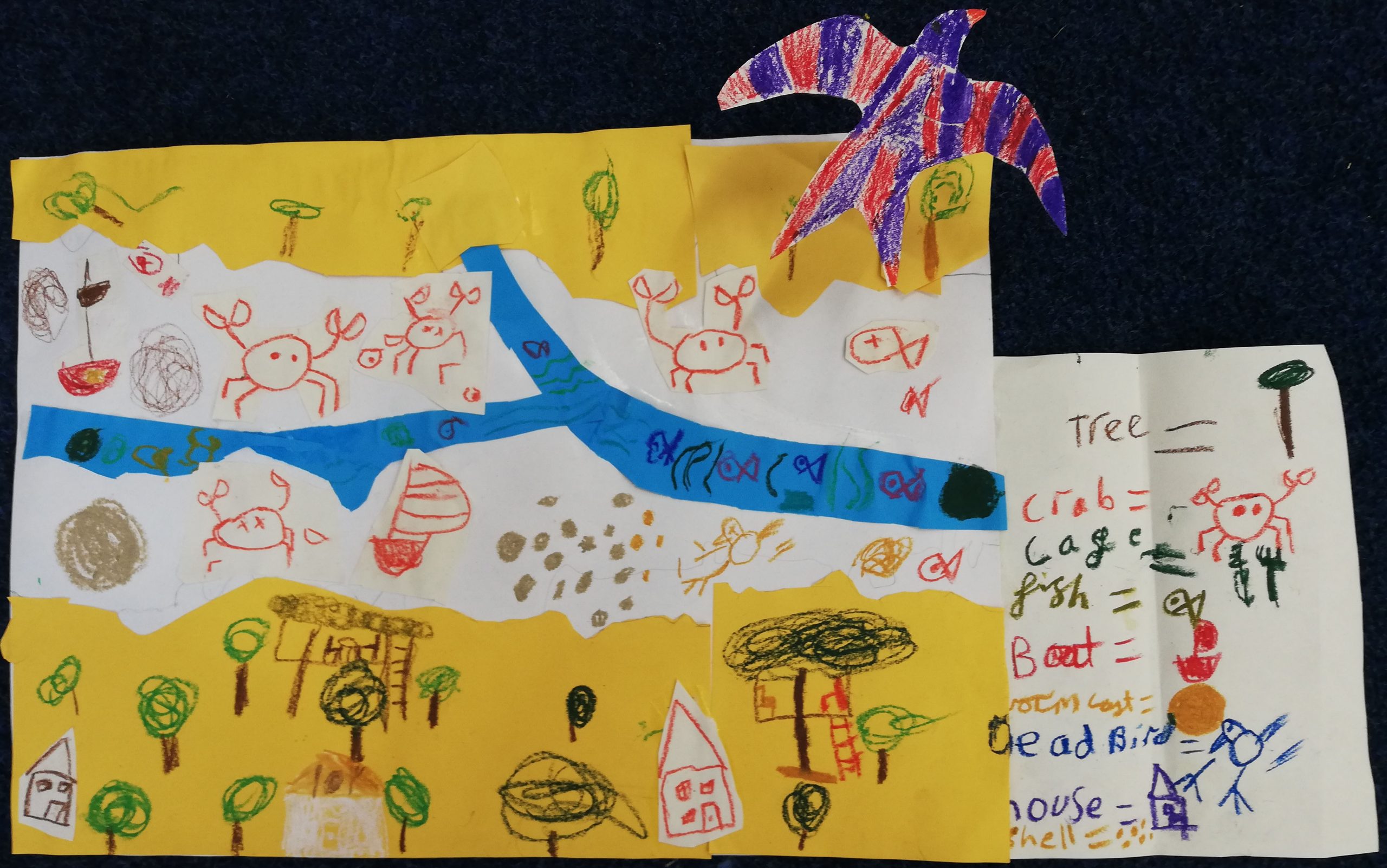 How does the tide work? What shape is the eastuary? How does a map work? Who is it for? We explored such questions as these in 2 days of workshops with one class from Marpool school, one day on location by the estuary making observations and being the tide (!) and one quick session making our maps.

Day one down at the slipway at the recreation ground at low tide (coming in): The class split up into pairs or small groups armed with ipads and observation forms. Notes were taken, some drawings made, ipads held and pressed and inevitably some got their feet wet (not the idpads)!
Then we acted out the tides splitting the group roughly into two with one group being the incoming sea tide and the other being the river meandering down the estuary. We appraoached then clashed and for a short spell the tide prevailed but then it retreated and the river pursued it! Not quite a rugby scrum but we felt the pressure as the river was forced either to go round or retreat. No-one was hurt in the making of this live illustration!

Back in class the following day we had a short time (half a morning) to make our maps and they got really exciting! We had legends (keys), wiggly river channels, wildlife maps and 3D elements. There was a choice of coloured paper and soft pastels which produced lovely organic marks. Lots of rapid cutting produced the estuary shapes, some with low tide river channels. Then we added what we know about the estuary.

It was amazing what the kids knew and learnt about the moon and the tides. Many thanks to Marpool staff and kids for all their hard work.

END_OF_DOCUMENT_TOKEN_TO_BE_REPLACED

Salmon Run Salmon Run Sunday 25 September 2022   The Atlantic salmon is a keystone species, an indicator of the health of our waters.  The story of the salmon also tells us about climate change and changing water temperatures in seas and rivers, water flow and...

END_OF_DOCUMENT_TOKEN_TO_BE_REPLACED

Tidelines Community Online GalleriesMaps, thoughts, diary entries and photos submitted as part of the ExeEstuary Box and online. Mapping the Exe Personal maps of the estuary Questions from the Exe Estuary Things we would like to know Exe Home Screen Phone framed...

END_OF_DOCUMENT_TOKEN_TO_BE_REPLACED

Film 7 of 7: Lympstone to Exmouth https://youtu.be/eosDNNUuc2o Jon's 7th film completes the circle almost to it's starting point. For the final part of the journey, the stone makes its way from Lympstone to Orcombe Point. It passes through the estuary on to the wide...